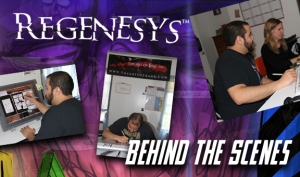 The creative comic duo of Frank Espinoza and Leah Gahagan are thrilled to announce that …the first issue of Regenesys™ entitled, “Book one: Death Becomes Her,” is finally complete! It took the team a little more than 3 months to produce this inaugural book and they couldn’t be any happier! Set for a launch at New York Comic Con 2012, Regenesys™ Book One will be the first of four books in the series and the first for this creative team, which now includes Mariola Espinoza (Frank’s wife) as flat colorist.

Now that the book is done, the files are being prepped for mass printing and a nice marketing campaign afterwards! We will also be launching a kickstarter campaign very soon, we will keep you all posted. In the meantime, enjoy these Behind the Scenes pictures of the making of Regenesys™ Book One: Death Becomes Her